The Nine, Host of Xer'at'chtelg'n

The Marines, their arms opened wide and heads tilted back, each stood at one of the nine corners marking the sacred symbol of the Architect of Fate. Marduk Fatebender recited from his grimoire, eldritch energies helding him aloft above the Marines.
"Xer'at'chtelg'n, I summon thee!"
In the centre of the sacred pattern, just below Marduk, energy congelead in the shape of Tzeentch's still shut Eye.
The daemon's name droned out of the Marines' mouths and vox-grilles.
Slowly, the Eye opened, tendrils of many-hued ectoplasm questing out and wrapping around the Marines.
"Xer'at'chtelg'n, I bind thee!" The Marines' droning turned into an anguished scream. It faded as their bodies melted and flowed towards the Eye.
The Eye swirled, lurid colours running through its iris, a cackling laughter filling the air.
The Eye opened wide, a sickly light filling the gloomy ritual chamber for a moment, then the Eye was gone.
A single figure stood below Marduk. It looked around, then it spoke.
"Made my home comfortable, master, if you don't mind", each word coming from one of nine different mouths. 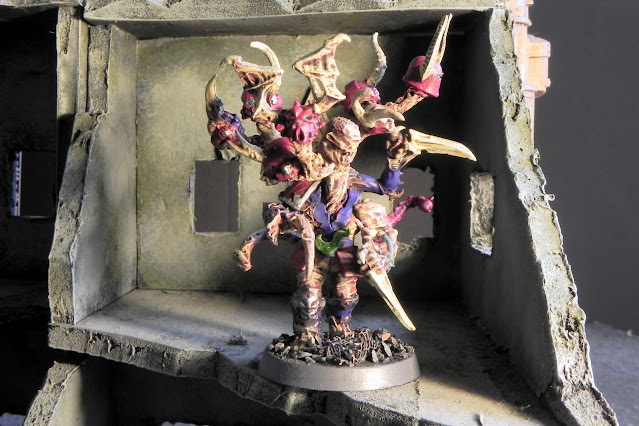 Happy Warhammer Day everybody!
When last year Games Workshop announced the first official Warhammer Day, with Saul, David, Lee and the rest of our gaming group, we though it would be fun to celebrate with a kitbashing competition. Saul, an inveterate fan of all kind of Eves, suggested the models should be revealed the evening before. Warhammer Eve was thus added to our calendar of festivities.
Nearly one year later, in the middle of a global lockdown, we revived the idea. As the 9th edition of Warhammer 40,000 had just been announced, we gave ourself a month to convert and paint something around the theme of '9'. And so, even if there are no official celebrations this year, we menaged to have our own little one!
I had been thinking of adding a Possessed to my Heretic Astartes Kill Team for a while, and them being devoted to Tzeentch, that made for a perfect match with the '9' theme.
So The Nine, Host of Xer'at'chtelg'n was born in my mind. 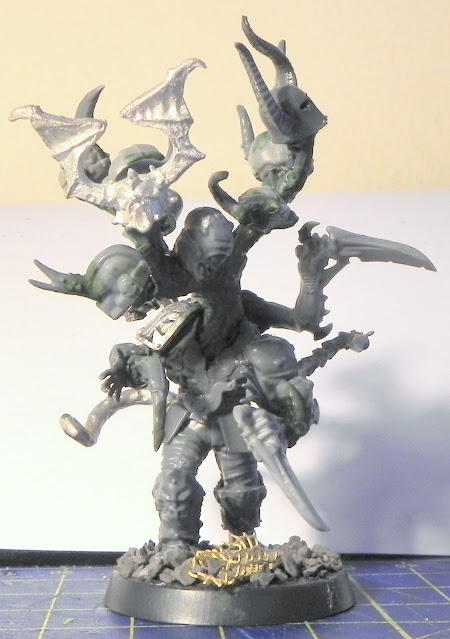 I raided the bits box, putting together an old Forsaken body and arms, heads from Space Marines (both flavours), daemons and Chaos Warriors, a Chaos Marine backpack and a shoulder pad, Ghoul and Hormagaunt arms, a metal tentacle from the 1990s Beast of Nurgle and appendages from the Chaos Warhounds. 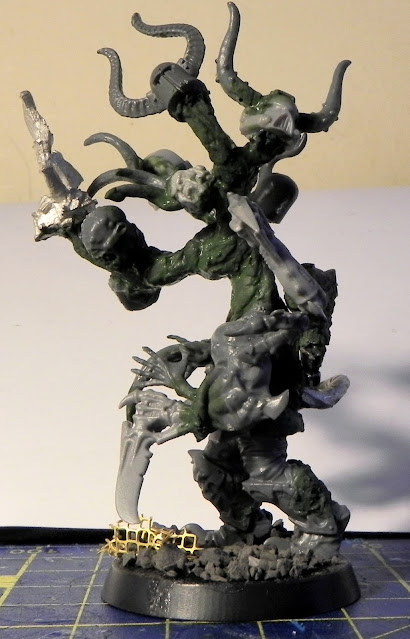 The heads were pinned to lengths of wire, then woven together, stuck to the body and covered in greenstuff. I also used Greenstuff to hide the spots where different bits joined, sculpting it as if stretched flesh, matching the design on Daemon Engines and Possessed. 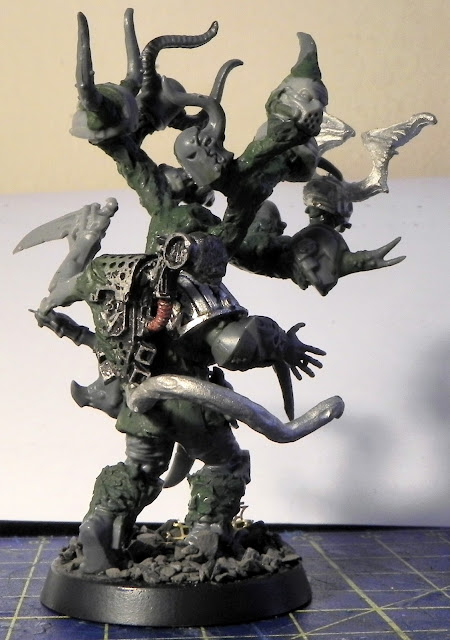 The colours for the armour were already decided, and them being purple and magenta, that worked great with the recipe for Inflamed Flesh from the Citadel Paint app: washes of Carroburg Crimson and Druchii Violet over a base of Bugman's Glow, followed by Kislev Flesh. 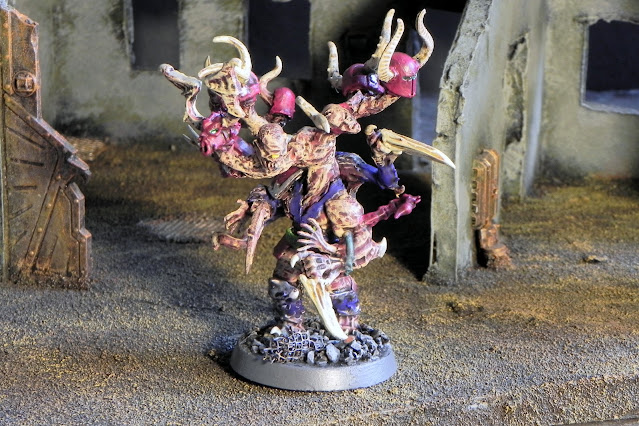 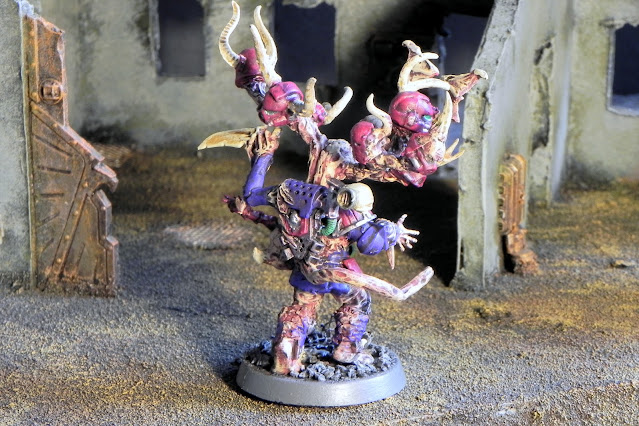 I'm really happy with how it turned out, the paint job emphasises the sculpting work to create a smooth flow from the armour plates to the bruised flesh, as if the two have melted. 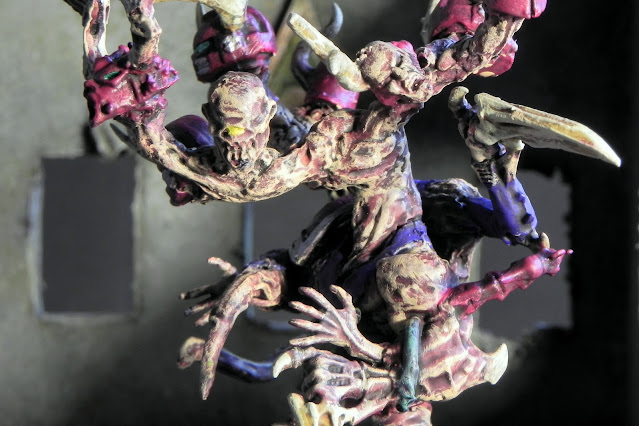 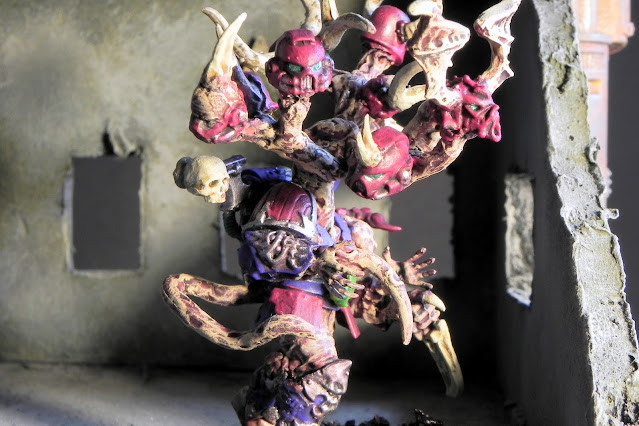 I just hope I can have some games with it before we get started on our Warhammer Eve 2021 kitbash!
And here are the other entries!

Posted by Godfather Viktor at 14:06 No comments: